We received very good news at the end of July.  Judge Martinotti of the 3rd district confirmed the arbitration award on contracting from May 25, 2018.  While we were confident the award would be confirmed, it is great news to have a decision.  We expect EMRE to abie by the court order and cease and desist from permanently contracting out our jobs immediately.

The ILEU has been in contract negotiations with EMRE management since May 2018 and we have been working without a contract for over a year.  This past May, the ILEU conducted a two-day strike, a first in our history.

What drove the membership to go on strike?

The ILEU filed charges with the National Labor Relations Board in June and November of 2018 alleging the Company violated labor law in numerous ways.

A month ago, an Administrative Law Judge of the NLRB issued a decision.   The decision can be read at

https://www.nlrb.gov/case/22-CA-223073.  Judge Rosas summarizes all of bargaining through Jan 2019 and provides legal analysis in understandable terms.

Judge Rosas found the Company violated the National Labor Relations Act due to the following actions:

This is not a joking matter.

Any attempts to downplay these violations are troublesome.  The Ethics policy from ExxonMobil's Standards of Business Conduct states:

"The policy of Exxon Mobil Corporation is to comply with all governmental laws, rules, and regulations applicable to its business."

We should therefore expect EMRE management to follow every law, especially laws that directly affect their own employees.

The ILEU has represented workers in EMRE for almost 75 years.  The key to our past successes grew from represented and non-represented employees working together, like a family.  Our future successes are in doubt if management continues down this path, creating a divide amongst those that need to work together.  As the chair of the ILEU bargaining team, I would like nothing more than to bring an offer to the membership for a vote.  The Company has made this impossible by holding the contract hostage over permissive subjects of bargaining for which the Union membership finds repugnant.

EMRE management set lofty goals for the Clinton site as part of its “Answer the Call” campaign.  Lecture Hall meetings aimed at motivating all of us to work harder and contribute more lose their message when the Company is committing infractions against their own workers. EMRE management must remedy the violations of the NLRA, and bargain with this Union in good faith, in order to allow us all to focus on working together to meet, and exceed, these goals.

As planned, the ILEU has concluded its Unfair Labor Practice warning Strike on May 3 at 6:00 pm.  The Union ordered its members to return to work unconditionally.  Most workers at the ExxonMobil Research and Engineering in Clinton, NJ will return to work on Monday, May 6.

The strike was successful in protesting the illegal tactics and Unfair Labor Practices perpetrated by ExxonMobil, raising awareness of our issues to the community, and showing the support of the membership.

The bargaining committee is heartened and inspired by the support we have received. Over 60 different members manned the picket lines.  The community offered support by honking horns and giving thumbs up to all those in red who were holding signs and chanting.  Many non-represented ExxonMobil employees showed their support as well by not crossing the line.

Union leadership will return to the bargaining table with the Company on May 7.   Additional sessions are scheduled for May 9 and May 23. 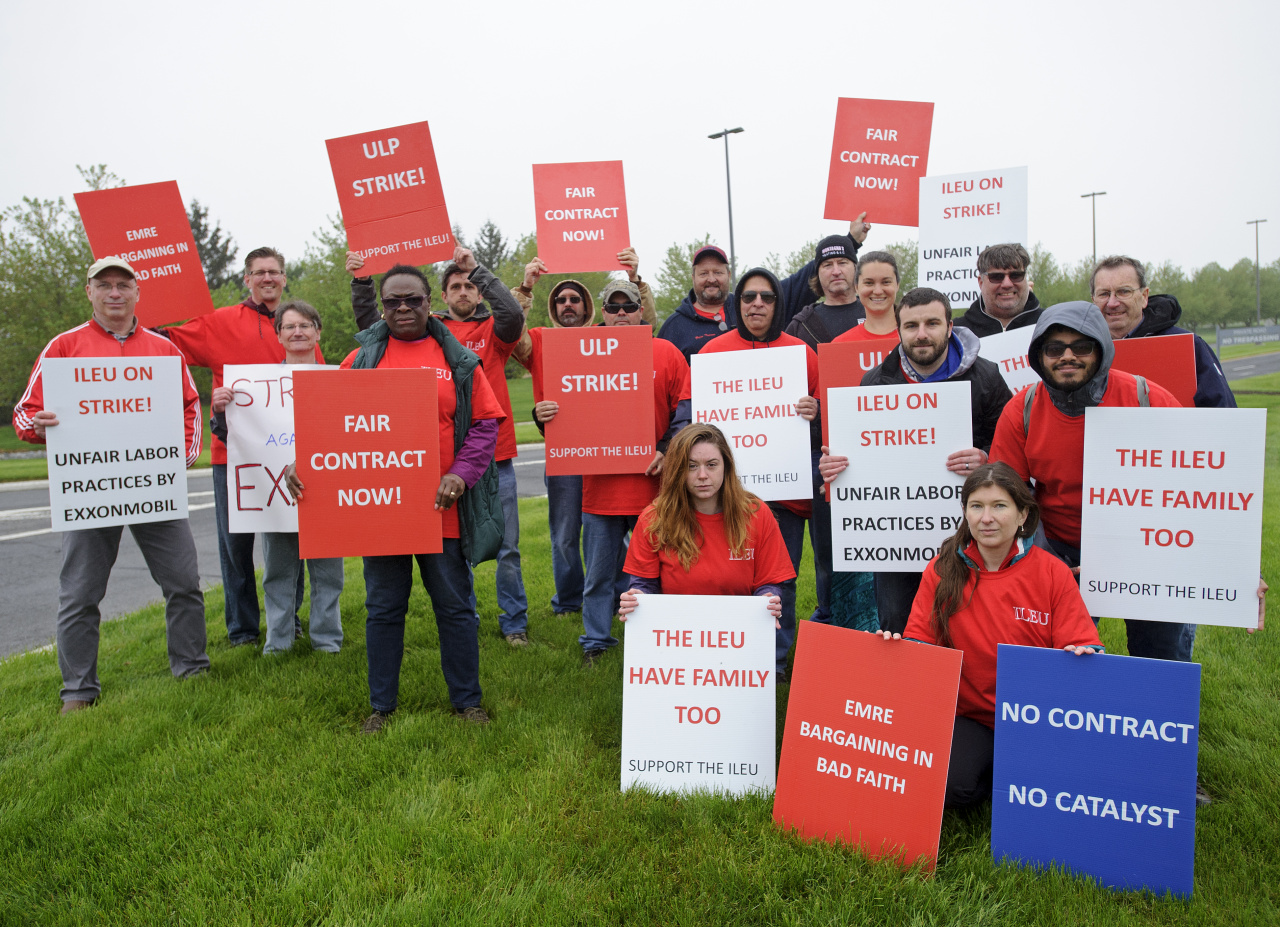 The Independent Laboratory Employee’s Union has called for an Unfair Labor Practice Strike against ExxonMobil Research and Engineering, a first in the Union’s 75 year history.

This site employs over 1200 people and is home to ExxonMobil’s Research and Engineering (EMRE) Technology Center, a facility comprised of 432 labs, 92 pilot plants and 850 offices.  The dual challenge of reducing carbon emissions while meeting the growing need for energy across the globe is a huge focus of this site.  Many of the employees featured in recent ExxonMobil commercials and advertisements work in Clinton and are represented by the ILEU.

Negotiations between the ILEU and ExxonMobil Research and Engineering Company representatives began on May 7th, 2018, and continue to this day.  The contract between the ILEU and the Company expired on June 21, 2018 after a brief extension.  The represented employees on site have been working without a contract for over 330 days.  The ILEU and the Company have met for 25 bargaining sessions.  Despite every attempt to reach a mutually acceptable contract by the Union, the Company has continuously insisted on permissive and illegal provisions.  The Union has attempted numerous proposals with the Company to try and bring the terms closer to a fair, legal agreement, but has been met with willful denial of all allegations and a blatant disregard for the law.  The Union had no other choice but to file Unfair Labor Practice charges against the Company for its inexorable bad faith bargaining.  Charges were filed in June 2018 (22-CA-223073) and November 2018 (22-CA-232016).

The investigating attorneys for the National Labor Relations Board reviewed full transcripts of the first 21 bargaining sessions between the ILEU and the Company.  The NLRB also received every proposal, from both sides, handed across the table during bargaining, as well as any other document relevant to contract negotiations.  Upon receiving testimony from members of the Union and representatives of the Company, the NLRB filed a formal complaint against the Company on January 29th, 2019.  In this public document, the NLRB accuses the Company of bargaining in bad faith, disparaging and denigrating the Union in its communications to its employees, insisting on language that is repugnant to the [National Labor Relations] Act, and unilaterally implementing changes without bargaining with the Union. On March 19 through March 21, 2019 a hearing was conducted before an administrative law judge of the National Labor Relations Board in Newark, New Jersey.  The results of the hearing are still pending, but the ILEU is very confident we will prevail.

Meanwhile, bad faith action on the part of the Company continued despite pending charges, and the NLRB swiftly amended the complaint to include these new actions.  The complaint was amended to address actions on the part of the Company making implicit promises to represented employees toward receiving certain benefits should they decertify the Union.  The Company continues to dismiss all allegations in its communications to employees and has not amended its existing offer in order to meet the requests by the Union to bargain in good faith.

EMRE is insisting upon permanently contracting multiple positions represented by the ILEU.  Their current wage offer is a non- retroactive 4 –year contract with wage increases of 1%, 1.5%, 2.0, and 2.5%.  The current offer for Parental Paid Time Off is one week, in contrast with eight weeks offered to all non-unionized employees.

At both the Billings Refinery in Montana and the Baton Rouge Refinery in Louisiana, ExxonMobil has reached contracts earlier this year with the USW 11-470 and USW 13-12, respectively.  The wage increases for both of the  3-year contracts were 3.5%, 3.5%, and 4.0%.  ExxonMobil is sending a clear message as to how it values the refining portion of the business versus research into solving the world’s climate change issues.

The bargaining committee has called for a ULP warning strike on May 2 and May 3, 2019.  When the parties return to the table, the Union is hopeful that EMRE will begin bargaining in good faith, and abide by the NLRA, and put forth proposals to reach a fair agreement.

Open Items on the Bargaining Table